It seems very hard to undertand that of all the 100's of pieces that I made, as I can see from my notebooks I might only find three to photograph. I sold some, gave others away and some I can recall my sense of loss in their breakage.

In hindsight it seems clear that our teaching was rooted in the Leach/Hamada nexus and I recall doing a great amount of trailed slip decoration. But there were other influences sneaking in from the younger teaching staff: notably the work of Hans Coper, Lucy Rie and I did a lot of work on cut forms. 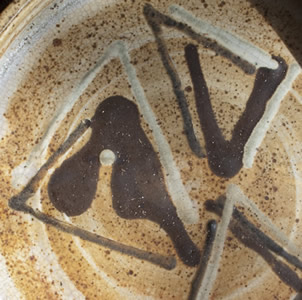 throwing and building in order to have bases for decoration. At that time, I was particularly interested in the nature of space-filling curves and tessellation schemes and these patterns of interlocked triangles or as here triangles denoted by their vertices were common themes.

The japanese iron glazes were staples but what was unknown to me at the time was the startling irregularities and serendipitous colouring that wood fired kilns can throw up. Once a year however we would have a raku firing and here is one of mine from that period. What if I have photographed its best side for the crazing and the copper colour? 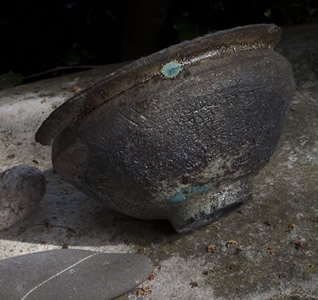 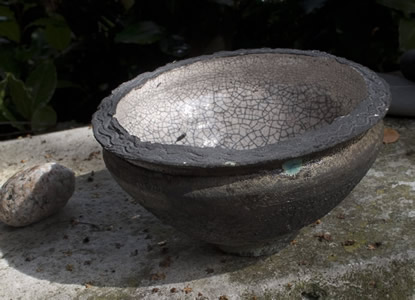 I was so very taken by the raku tradition that I made this bowl in a heavily grogged stoneware and finished in iron oxide colouring to have the rough aesthetic but a more substantial body. Perhaps its survival echoes the raku bowl above by its sheer unusability...